The first Teddington Methodist Church was built in 1859, and was situated in Clarence Road. It was a modest building, later known as Craig Hall. The building exists to this day, but has recently been redeveloped into housing.

The 1877 a member of that church wrote to the Superintendent of the Richmond Circuit saying that he would like to further the work of Methodism in Teddington by contributing a quarter of the cost of a new building. His offer was made on condition that the work be carried out within two years. The Foundation Stone was laid on 1 October 1878, with the new building being opened on 1 July 1879.

The new church was a very imposing edifice, typical of Methodist chapels built around that time, many examples of which can still be seen throughout the country to this day. A picture of our chapel can be seen in the main church hall. It was situated at the junction of Hampton and Stanley Roads. The Chapel, as it was known until Methodist Union in 1932, was approached through a pair of wrought iron gates, onto a paved path leading to a flight of steps, which in turn led to the Chapel entrance. 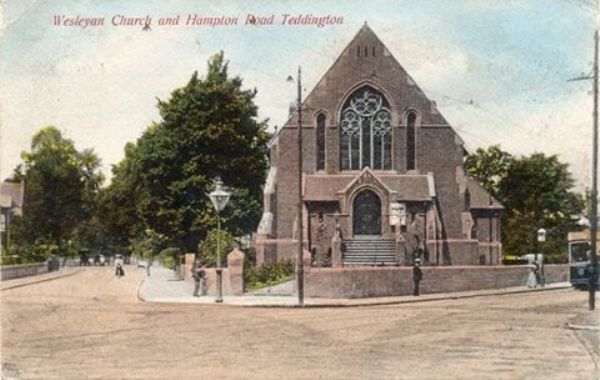 Having negotiated the gates and the path, and having climbed a rather steep flight of steps, one would reach the vestibule, where the Steward would hand out hymnbooks. There was now a choice of entry, left or right: there was no centre aisle. Pews were arranged so that a row was located on each side and in a centre block. As in many churches and cathedrals, there was a very high, vaulted ceiling.

At the front of the Chapel, were three large arched windows, which were very impressive. Round each one, the Beatitudes were very beautifully scripted, and on the wall between, were various Texts. It is said that in 1892, when a Rev James Walker came to Teddington, his wife asked for permission to do this work as the walls looked so bare. She was apparently a very talented artist.

Below the Chapel was a large hall, known as the Lower School Hall, so called because all Sunday School work was carried out there until 1914, when No.8 Hampton Road was purchased for a fully graded Junior and Senior department, leaving the hall for the Primary department. Other Chapel activities took place down there as well. Access was by a flight of steps between the church and the Manse, known as the Chateau, in Hampton Road.

In 1916, the Rev GR Forde came to Teddington. He had been a missionary in the Transvaal, and soon spread his enthusiasm for Overseas Missions throughout the church: work that carries on to this day. In 2003, history repeated itself with Rev Peter Clark joining us from South Africa until 2015.

Prior to 1922 there was a central organ in the chapel and against the wall at either side was an oak screen. In front of the screen was a rostrum from which the Minister would preach. Against the outside wall on either side were the choir pews. 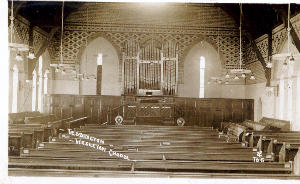 In 1922, extensive renovations were carried out to the chapel. The side screens were removed, as was the rostrum. The organ was moved to the left and the choir pews on the right went. A high oak pulpit was placed on the right, by the Vestry door, and an oak panel was placed behind the Communion table.

The organ was pumped by hand until 1930, when an electric blower was installed. In the same year a replacement Communion Table was presented by Mr & Mrs E A Birch, grandparents of Gwen Bradley, a local preacher at the church who died in 2002.

In 1930, Rev Frank Hart arrived at Teddington. A friend of Mahatma Gandhi, he would tell some wonderful stories about his service in India. 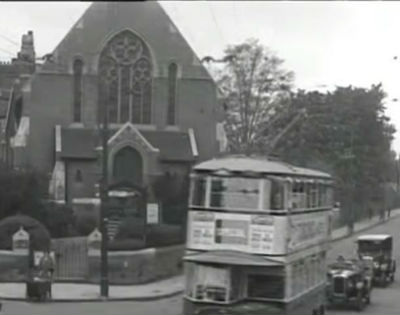 In 1932, deaf aids were installed in selected pews. The deaf aid was plugged in with a short lead. The contraption itself looked something like a wooden spoon: it had a long handle and the earpiece looked like the bowl of a spoon. The Society Steward would come into the church before the service to test that the deaf aids were working properly. 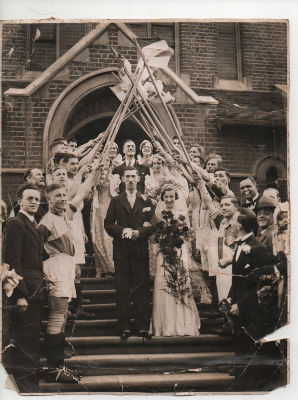 The Wedding of Alf and Winnie Philips 14th April 1934.

The picture was taken from the pavement at the bottom of the steps that led to the entrance to the Church. Under the Church was the hall, which was used as the Sunday School, very big in those days.

The guard of honour in their football kit forming an arch with corner flags were from the football team that Alf played for in those days. We don’t know the name of the team except that it was in Teddington.

In August 1944, the church was demolished by a flying bomb (saving the Hospital in so doing) and the church was forced to commence worshipping in the Memorial Hall in Church House, Hampton Road. 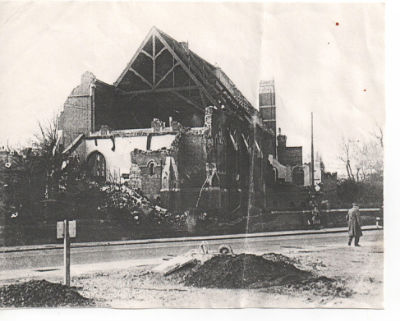 By 1952, work on the re-building of the church in its present location had commenced. The foundation stone was laid on 6 October 1951 and the Church re-opened on 25 October 1952. From that time until 2003, very few changes were made to the structure of the Church, as can be seen from the photographs of the 1952 re-opening displayed in the main hall. The Youth Hall was added and subsequently, in 1976, the main hall.

Over the years, amplification and a loop system were added, the organ replaced, and a clavinova purchased to accompany some hymns and songs. Banners brightened the chancel and Drama by the church drama group was introduced into some services.

In July 2003, services moved temporarily into the Church Hall to enable the pews to be removed and work on the present renovation to be commenced. Services returned to the church at the beginning of February 2004 even though some work still needed to be completed.

Methodism has now existed in Teddington for nearly 150 years. The premises have experienced many changes over the years to enable us to continue serving the local community and as a church we continue to thrive. With the present phase of the building work now completed, enabling the worship area to become a multi-purpose space during the week, it is not our intention to rest on our laurels.

By the end of 2008 we had refurbished both kitchens and the meeting room, and created a quiet room in the office previously occupied by Teddington & Hampton Wick Voluntary Care Group, who had moved to a room made available at the other end of our complex.

The church hosts activities for over 1,000 adults and children during an average week and we hope to continue giving a warm welcome to those visiting us from the local area in the future, truly justifying our recently adopted title of: